Greetings fellow carbon units, and welcome back to Big Finishing Move. This little slice of heaven is where I get the chance to look at the works of audio juggernaut, Big Finish, and let you know if their wares are worthy of your hard earned dinero or your better of saving it and splurging on double extra cheese next time you order a pizza. Today we’re following up with the Fourth Doctor for the latter half of the story that began with Requiem for the Rocket Men (totally worth checking out my previous review if you haven’t already). So does this arc have a satisfying conclusion or wallow in wasted potential? Let us dive into the arena and see what’s  what!

TARDIS Team: The Fourth Doctor, Leela and K-9 Mark I

With the Rocket Men threat dealt with Leela surprised the Doctor and decided to leave the TARDIS and traverse the cosmos with her student/love interest Marshal, but before they had a chance to go a really get to know each other she is kidnapped by the Master. Marshal tracks the Master across space to a long thought abandoned where the galaxies evil elite enter “champions” to fight to the death for fun and profit. The Doctor meanwhile has been busy sulking at the loss of his favorite savage, but when he receives word from Marshal of all that has happened the Time Lord is driven to shake off his funk and go save his friend.

One of the stronger points of this story as well as the whole Fourth Doctor range is the further development of the Doctor and Leela’s relationship. Big Finish has been able to add layers to these characters without betraying the teacher and student relationship we all know and love. Leela even goes as far as to try and recreate some facets of this sort of relationship with Marshal. In fact the story itself looks at the relationships between men and women and the different forms they can take. The Doctor and Leela, Leela and Marshal, the Master and Leela, and we even get to see Master with his own twisted girlfriend.

Big Finish sought to use this story to better flesh out our characters and provide further insight into Leela’s final TV story, The Invasion of Time with varying results. The introduction of the Marshal character was to show how Leela acts in a potentially romantic situation. One of the major complaints about The Invasion of Time is that the romance between Andred and Leela springs out of nowhere but this new story sets up that Leela is rather stand-offish or dismissive when it comes to open declarations of love except in situations where the subject is pushed. While I understand their intent I don’t think it really works in the story as they are trying to explain away a poorly thought out and rushly executed romance used to write a character off of a show by providing us with a previous rushed romance that was equally awkward and under-expressed. It is trying to pass off flawed writing as a character quirk and I’m not buying it. As I said, I get why they did it and when the Leela/Marshal relationship reaches its inevitable conclusion Louise Jameson acts her ass off, but sadly it once again is the case of trying to fix something only making the flaw stand out worse.

What does work for me is a quick exchange that happens near the end between K-9 and the Doctor. When Leela decided to stay on Galifrey K-9 decided to leave as well and stay with her. Due to this story that moment has all the more meaning and significance. It shows that the Doctor cared more then he could ever let on to Leela’s face.

Death Match is a quality follow up to Requiem for the Rocket Men. It is a little clunky in parts, the Red Knight doesn’t get nearly enough development, and I don’t think the romance works as well as it needed to, but there is so much good here I can easily look past the flaws. The high point of this whole thing is this sucker has one of the best Doctor and Master exchanges I have ever heard. Every line is a perfectly designed piece of the overall puzzle that is each of these men with loads of layers and subtext for fans to chew on for days. Then we have our actors who realize what they’ve got here raising their games to accommodate the writing and having to kick it up even higher to keep pace with their fellow actor. Three cheers and a round of applause for Matt Fitton, Geoffrey Beevers, and good ol’ Tom Baker. Another interesting thing here is Leela’s relationship with the Master, a foe she never met in during the TV run. They’ve now met multiple times and he has truly put Leela through hell twice now. There is some real meat on that bone and I hope Big Finish is wise enough to capitalize on it in the future. Love, loss, and laughs; this one has got it all!

Looking for even more audio goodies to listen to? Check it, we here at One of Us have our own audio drama series Infinite Variations, as well this being the home of the spin-off from The Intergalactic Nemesis, named of Salt. Now, all this is stuff happens to be 100% FREE here, so clean the peas and carrots out of your  ears (as my Mother used to say) and give them a listen!

Oh, and for next time, well, the title speaks for itself:

Phantasmagoria, The Fearmonger, The Light At The End, The Spectre of Lanyon Moor, Storm Warning, Blood of the Daleks, The Chimes of Midnight, Seasons of Fear, The King of Sontar, White Ghosts, Dark Eyes II, The Crooked Man, Project: Twilight, The Evil One, The Harvest, The Last Of The Colophon, The Council Of Nicaea, Destroy The Infinite,  Afterlife, The Abandoned, Zygon Hunt, Revenge Of The Swarm, Philip Hinchcliffe Presents Box Set, Dark Eyes 3, Mask of Tragedy, The Fourth Doctor By Gareth Roberts, The Exxilions, The Darkness of Glass, Dark Eyes IV, Requiem for the Rocket Men, Signs And Wonders 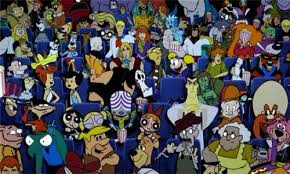 What are your Top 5 Animated Shows? Let us know! Leave a comment or e-mail us at fiveplaynet@gmail.com!