Not so long ago, in a Disney Studio far, far out of their minds…

1. Indiana Jones and the Magic Kingdom of the Cosmic Cube 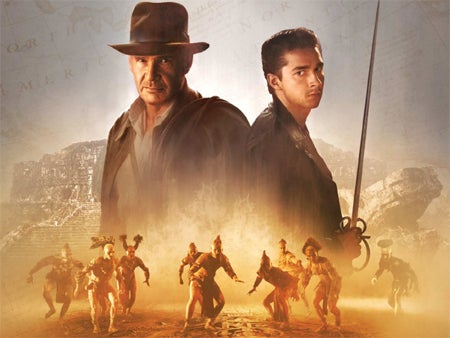 “Aliens… I hate these guys”

Famed archaeologist/adventurer Dr. Henry “Indiana” Jones is called back into action, when 9 months after his honeymoon, he is approached by a mysterious man who claims to work for a secret agency by the name of S.H.I.E.L.D. He is asked to investigate a strange archeological dig site. Fascinated by the strange anomalies surrounding this site, Indy decides to dawn his hat and whip one last time. While investigating, he discovered a strange glowing blue cube. All of a sudden, lightning struck the cube and opened up a portal into outer space, sending Indy to the realm of Asgard, which is populated by Norse space gods. All of a sudden… Asgard is attacked by TIE fighters! So now the gods must fight off a man by the name of Darth Vader. Caught in the middle of an intergalactic war between realms, will Indy get back to earth in time for the birth of his second son that isn’t Shia LaBeouf?

2. The Avengers: Stitched Together After hearing about the events on the Hawaiian Islands, Nick Fury, of the agents of S.H.I.E.LD., told the Avengers to go out and recruit Stitch, a powerful mutant experiment. While flying there on the Helicarrier, they were attacked by a space craft and crash landed in Kauai. They were then captured by a small blue creature, who happens to be the mutant experiment they were sent to find. When the Avengers demanded to know why they were imprisoned, a 4-eyed extraterrestrial by the name of Jumba, explains that they intercepted an intergalactic message, hinting at another alien attack on Hawaii. After clearing up the misunderstanding, the Avengers are released, and they try to convince Stitch and his friends to join their team. They refuse, because they are contracted by the Grand Council of the Galactic Federation. Suddenly… they were attacked by TIE fighters! After fighting them off, a broadcast was made by a man who goes by Darth Vader. He claims that this is only the beginning, and he is on a quest to conquer the multiverse in the name of the Sith. Now Stitch and friends must team up with the Avengers, and battle for the safety of Earth! Quacky scientist Donald Duck is dissatisfied with his published work. He believes that there is more out there to explore. One day, while experimenting with the Cosmic Cube, he opened a portal to a parallel Universe. On the other side, he is greeted by a cigar chomping duck by the name of Howard. While discussing the possibilities of what they can do with this new found discovery, Donald’s lab was attacked by, you guessed it, TIE fighters! A man, cloaked in black and wielding a red laser beam sword, takes the cosmic cube and disrupts the reality matrix. A singularity within the portal was created, and caused a reverse polarity of electrons. The portal then exploded, knocking Donald Duck unconscious. He awakes not in his lab, but in a world inhabited by anthropomorphic ducks. Cigar in bill, he runs to the nearest bathroom and looks in the mirror. To his shock… he has become Howard. And now, he has to find a way to return to his universe, find Howard in his body, and fix everything before it is too late. They are in for one Freaky Duck Day Afternoon. After the events of the Mandarin debacle, Tony Stark has destroyed all of his Iron Man suits. He began developing a new computer program for S.H.I.E.L.D., trying to incorporate J.A.R.V.I.S. in to the information main frame. While transferring data, J.A.R.V.I.S. malfunctions and shuts down. Once Tony reboots the system at its core, J.A.R.V.I.S. emits an intense beam of light, dissolves Mr. Stark into digital information, and downloads him wirelessly in to his mainframe. Tony finds himself in a bizarre virtual world were he meets J.A.R.V.I.S. in ‘human’ form. He explains that after Obadiah fell into the arc reactor, he was digitized and sent to the digital universe. Going under the pseudonym Clu, he plans to take over the internet using TIE fighters that shoot virus lasers. Tony and J.A.R.V.I.S. were then captured, and forced in to virtual gladiatorial games. Now, they have survive and stop Obadiah from ruining the internet! “When I left you, I was but the learner, now I am the master.”

Luke Skywalker, now a Jedi Master, was teaching young padawans in the newly formed Jedi Academy. During meditation training, he begins to feel a strange disturbance in the force. He gets a vision of Tatooine being destroyed by Darth Vader. Shocked and confused, he talks to the ghost of his father about his vision. Anakin is also confused and concerned, and does not know what this vision means. Luke gathers Han Solo and Leia, and travels to Tatooine using the Millennium Falcon. On the way, they were caught in an unusually strong gravitational pull, and crash landed on an unknown planet. When they left their ship, they witnessed a very frightening sight: a gaping whole in all of space time reality. They are attacked and captured by two formidable figures. One is a titan by the name of Thanos, and the other is none other than Darth Vader. They describe their plans of conquering the multiverses, using the rebuilt imperial army, and the Infinity Gauntlet to jump between realities. Luke snaps, and demands to know who is behind the mask that once belonged to his father. The imposter Darth Vader slowly takes off his helmet, and reveals who he really is… Loki. Laughing, he puts on the infinity gauntlet, points to the wormhole, and says four dreadful words that shook Luke, Han, and Leia to their core: