Post-Apocalyptic Psychology: Children of the Apocalypse A lonely man walks down the streets of a desolate concrete jungle. The smell of asphalt, vegetation, and death sickens him, for it reminds him that he has been walking for far too long. As he makes his way through the decaying city, a sight stops him in his tracks. Swinging from a lamppost is a body hanging from a noose with a sign around its neck. As the man gets closer to the body, he sees a handgun beneath its swaying feet. He reads the sign:

There is more hope

I’ve recently been fascinated with multiple theories of social psychology and ideas of human nature regarding how we acquire perceptions and behavior. After playing through The Last of Us and catching up on The Walking Dead, I started to think about how some of these paradigms would shape human behavior during the zombie apocalypse (like every college daydreamer).

That’s why I love the post-apocalyptic genre: it can be a form of sociological fiction. If people were born into a world where society is obliterated and the concept of humanity becomes distorted, how would they behave? How would philosophies, beliefs, and perceptions evolve and shape a world fueled by nihilism and chaos? With this lens, I would like to explore two ideas: terror management theory and Albert Camus’ idea of the absurd.

This theory has brought to light an interesting paradigm as to how we view human behavior. It combines both philosophies of evolutionary and existential psychology to explain certain functions of in-group/out-group behavior, aspects of self-esteem, and the psychological foundations of culture. There are two main constructs of this theory:

1. We are biologically predisposed towards self-preservation.

2. We don’t like the idea of the universe being meaningless chaos because that deflates the value of our own existence. Thus, we create our own meaningful universe through language, symbolism, and culture, which provides the foundation for our well-being.

Studies done under TMT generally involve the idea of mortality salience, which is a term used to describe something that brings about the awareness of one’s inevitable death. The theory is that when something reminds us of our own mortality, it generates anxiety, and the reaction is a compensatory one that attempts to restore balance to your psyche. This is because when thinking about death, people have a strong aversion towards the notion that in death, one yields no more significance than the same decaying organic matter as everything else (thanks Tyler Durden).

This creates a dissonance with the desire for self-worth. As a result, people tend to tighten their grasp on the ‘truths’ of their own beliefs in order to refute that nihilistic reality, and that their value persists beyond death. This means that if anyone or anything disagrees with our beliefs and tries to burst our proverbial bubble, we will tend to lash out and attack them either intellectually or physically.

So why am I telling you all this? What does this mean within the context of the zombie apocalypse? Well, like I said, when we are fearing for our own lives, we tend to grasp on to anything that gives our lives meaning. Religion, gangs, culture, anything that we can relate to that allows us to establish a meaningful presence, will have a heightened sense of importance. It explains why people form many different groups/clans with their own ways of living, and why there is a lot of hostility towards others (i.e. Seasons 3 and 4 of The Walking Dead with Woodbury vs. The Prison).

Think about the medieval times. This was a time where death was everywhere. With disease, famine, and the inability of medicine to deal with common injuries, death was a brutal part of most people’s everyday experience. So what happened as a result of all this? With the Catholic Church being the only church in Europe at that time, it became a very powerful force, being involved with politics and daily living. Soon, military campaigns were being sanctioned by the church a la the Crusades. The Church’s wrath was also felt domestically. The idea of witchcraft goes against everything their ideologies stand for, which resulted in the strong aversion towards these so called “witches,” resulting in initiatives such as the Salem Witch Trials.

If we view the zombie apocalypse like a ‘second Dark Age’ in our history, where mortality becomes highly salient everyday, that might give a realistic picture of how society could adapt to this newly integrated force of nature. What’s even more fascinating to think about is within the context of the diversity in the U.S. since we are somewhat more accepting of all these religions and cultures. After the apocalypse has hit, society will  be fragmented as people will close their doors and hold on to their in-groups. What is even more interesting to think about, is how these religions and cultures will evolve to incorporate and explain what these zombies are doing here… but that is a whole article on its own.

Let’s think about thinking. It was the great philosophers from Aristotle to John Locke, and everyone in between, before, and after them, that paved the way we perceive the world today. From politics, science, education, enlightenment etc., we can all thank history’s pioneering thinkers for establishing the foundations of life and providing us with a unique human trait: reason. Everything we do is because of reasons. We can be happy because of [reasons], and [reasons] can make us happy. In a world swallowed by death and chaos, manifested in the form of rotting flesh, everything becomes about survival. There are no ambitions to pursue personal endeavors. Whether it be becoming president, filmmaker, or Justin Beiber, scavenging for food and living the day after next is what’s important… and it’s the only thing people have to live for. A very nihilistic and meaningless way of living. So what’s the point of living in this world, if all we are doing is prolonging the inevitable? What is there to live by? It would be easy to say that it is within our nature to survive like I mentioned in TMT. Our buddy Charlie D. would say that it’s about survival of the fittest and natural selection. We live to procreate and perpetuate our species forward. Bam. Done. However, there is a philosopher by the name of Albert Camus that provides a very interesting way of thinking that is both nihilistic yet optimistic. His idea of living is through what he calls the absurd.

In his book The Myth of Sisyphus and Other Essays he essentially discusses that what is ‘absurd’ about human existence, is the conflict between what we want from the universe (meaning, order, and reasons) and what we actually find in the universe (formless chaos). It is, in ways, similar to the pillars of TMT, but Camus takes it to a different direction. He proposes the idea that we can accept and live in a world devoid of meaning or purpose. In fact, trying to find the meaning of life is impossible, and just leads to frustration and despair.

The absurd is a contradiction that cannot be reconciled, and any attempt to reconcile this contradiction is simply an attempt to escape from it. Instead, to be constantly aware of this meaninglessness, and to struggle against it, is what allows us to live life to the fullest; live life by the absurd. Once we adapt this philosophy of life, there are three pillars of how this lifestyle will make us happy:

1. We must not accept any answer or reconciliation in our struggle.

2. We are absolutely free to think and behave as we choose

3. We must pursue a life of rich and diverse experiences

He uses Sisyphus as an example of how to live by the absurd, if we imagine him as happy. The story of Sisyphus in a nutshell is about a guy who was punished by the god to roll a rock up a mountain, only to have it roll back down the bottom when he reaches the top. The task is endless and impossible to accomplish, so this task will last all of eternity. In a way, it can serve as an analogy for the human condition in the zombie apocalypse: he must struggle perpetually and without hope of success. Camus goes on to say that we must imagine Sisyphus as happy, once he accepts the futility of his actions. Once he realizes that the task is impossible and meaningless, he is actively aware of the ‘absurdness’ of the task. He becomes happy because letting go of hope, is to also let go of any kind of frustration and anger when he constantly fails this task, meaning the gods no longer have anything to punish him with. What is left is to accept that his life is nothing more than an absurd struggle, and that even though this task is impossible, the effort and struggle is what provides him the feeling of being alive. The journey is more important than the destination.

With that being said, that is just one idea of how people might view the world in the apocalypse. One thing that would be interesting to look at would be how philosophy would evolve. If someone were to be born in to this world with a blank mind (Locke’s Tabula Rasa theory), what perceptions would they acquire? If you are born in to a world of zombies, then that becomes your reality; it becomes a normal way of living. With that state of mind, how would philosophers pave the way for humanity? 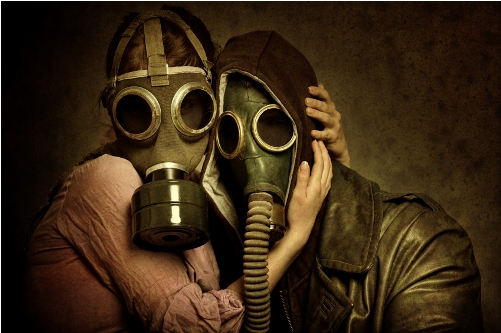 Love in the time of zombies

There are so many other themes and ideas I would like to explore under this context. For example, the idea of gender and love. In the apocalypse, the idea of gender might disappear and relationships as we know it now might not exist either, due to the harsh sociological setting. Indeed, there are no social contracts here, there is no gender role, as the world we would live in is a masculine one in the sense that you kill or get killed. Men and women (and children) kill or get killed. In the sociological sense of it, there are no women and men, no hetero- or homosexuals. There are people and individuals. Period. In such a world there is naked love (again, the question how love itself changes in such a context is intriguing), but man-woman, or man-man, or woman-woman love might not exist, since gender might not exist. All the characters have is their physical sexes, but no social-psychological attachments to them.

But I believe I have talked too much. I would like to hear what you guys have to say about the apocalypse! What are your favorite Post Apocalyptic canon? Are you prepared for the fall of humanity? Whatever your thoughts, comment below and discuss with the Us!

Also, special thanks to Sarah Amburgey for drawing up that cool piece for my intro, and Alexander Brox for the featured image! Check out their art portfolios by clicking on the pictures below!