The Humble Origins of ‘Rick and Morty’ First off, if you are not watching Rick and Morty, you need to make that one of your top priorities in life. What is this show about? Well, we have a super genius alcoholic scientist by the name of Rick, and his grandson who may or may not have a slight mental disability (according to his dad). Together, they go on “high concept sci-fi” adventures that range from trans-dimensional escapades, to an Inception parody involving dogs acquiring sentience, creating mech-suits, and trying to bring an end to the dominion of mankind. You know, standard stuff.

One of my favorite episodes involves a species called the Meeseeks, a group of strange blue beings created via a Meeseeks box. Their very purpose in life is to complete the single task you give them. After they complete that task, they cease to exist. What happens when they can’t complete that task? Well, they start losing their minds because existence is pain to them, and all they want to do is die. “Meeseeks aren’t suppose to exist this long! It’s getting weird…”

The show parodies everything from M. Night Shyamalan twists to Jurassic Park. There are no limits to the creativity and cleverness of this show. Some are claiming that this show is potentially the next Futurama, and I’m inclined to agree with that. Imagine if the spawn of Doctor Who and Adventure Time was traveling at the speed of cocaine. Yeah, it’s pretty awesome.

When watching this show, you might say that the dynamic between the main characters have a striking resemblance to Doc Brown and Marty McFly from Back to the Future. Hell, Rick even looks like Doc, and Morty spelled backwards is Marty (I didn’t get very far in the 5th grade spelling bee). Interestingly enough, co-creator Justin Roiland actually made a short back in 2006 called The Real Animated Adventures of Doc and Mharti:

Despite it’s crudeness, what you get here is the seed of an underdeveloped idea. Structurally, it is every bit Rick and Morty. By that, I mean we have Doc/Rick coercing Marty/Morty into doing something that is insane and beyond his comprehension. However, it is an essential task for them to overcome an obstacle. The repercussions of overcoming that obstacle leads to another problem in the original timeline/dimension, and they need to overcome that and so on. The bones are clearly there, but it wasn’t fleshed out. 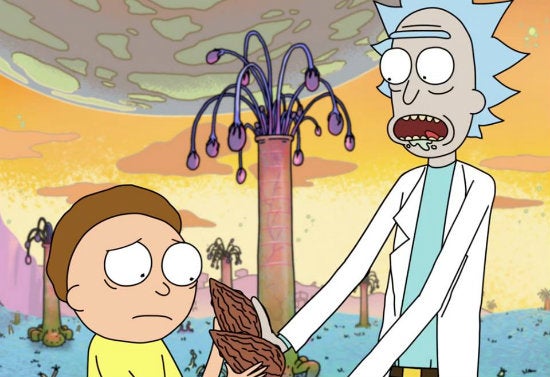 “I need you to take these seeds Morty… and put them up your ass! I need you need to put them WAAY up there! I need them for my research, and they won’t go through interdimensional customs.”

Had I seen this first, and was told that this was what Rick and Morty was based on, I would have turned my nose up and walked away. I was confused when I first saw this, and wondered how such a juvenile short would get its own series. In my curiosity, I retreated into the woods, and decided to hone my skills in the ways of Google-Fu. What I found out was that this short was created by Roiland in an attempt to annoy Universal’s lawyers. Why? Revenge perhaps? Was he one of the writers for Back to the Future but was unjustly cut from the project? Well, he was born in 1980, meaning he was 5 years old at the time of release. So that is unlikely… unless… he had a DeLorean. But let’s not open that can of worm holes.

The truth is… I don’t know. That’s the only thing I could find on why he made that short. If he wanted to piss off Universal’s lawyers just for funsies, then that’s awesome. The last bit of information I could find, was that he submitted Doc and Mharti to Channel 101, which is a non-profit short film festival, in where submissions need to be in the form of a pilot in just under 5 minutes of length. The festival was created by Rob Schrab (who wrote the comic Scud: The Disposable Assassin and co-wrote Monster House) and none other than Dan Harmon, the showrunner of the much beloved NBC sitcom Community. Obviously, Mr. Harmon saw some great potential in this material and voila, we now have the greatness that is Rick and Morty.

So what did the Us nation think about this short? Do you have anymore information you can tell Us about Roiland’s vendetta against Universal? What’s your favorite episode? Whatever your thoughts, comment below and discuss with the Us.